Dads, daughters and sons packed in a weekend’s worth of fun at this year’s winter campouts this past February.   Girls and boys competed in games, sled down snow-filled hills, and hunted for plates during the day while a Council Fire followed by bingo concluded the night activities. The children then played until they were exhausted enough to fall asleep on the hard, wooden bunks or until their dads said that it was time.

Into the early morning, dads huddled around the roaring campfire exchanging tales of past glories and failures while enjoying the camp chef’s burgers, dogs, and even some more exotic creations.  A group of dads peeled off into the cabins to play card games.  One by one dads trickled into the cabins.  Eventually the cabin lights went dark and the camp fire burnt itself out.  Campers grabbed a few hours of sleep before they made the journey home with new tales to share with their families. 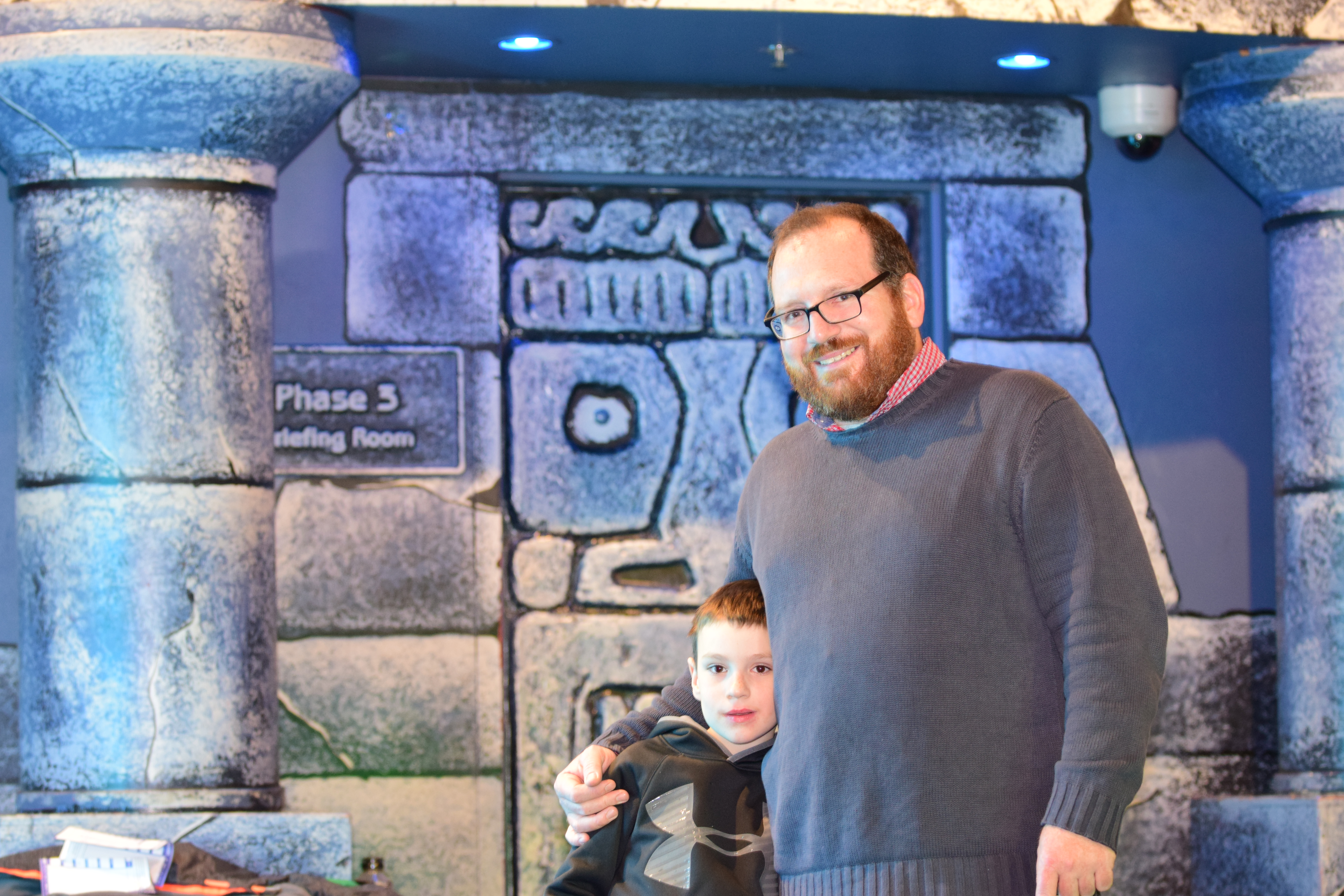 Chippewa Chief Mike Hannigan and Sauk Chief Russell Benko  joined forces for a fun filled evening at Laser Quest in Norridge, Illinois last week.    Scouts, past scouts, siblings and even a few dads suited up with laser packs to battle.  Multiple rounds or Laser Quest raged on for  an hour and a half.    The weary warriors had snacks after multiple rounds at Laser Quest and called it a night. 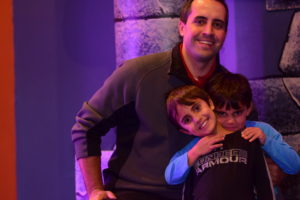 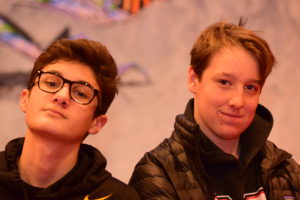 We would like to thank Joe at Laser Quest and his entire staff for being so accommodating.  Enjoy the great pictures of the kids that the Laser Quest staff took the night of the event. 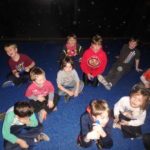 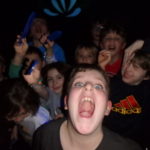 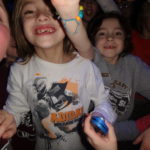 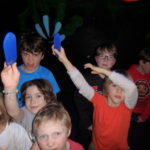 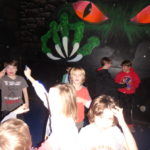 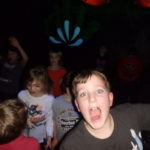 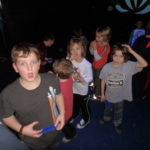 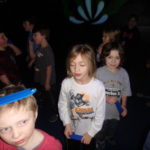 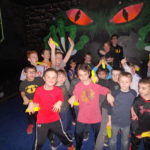 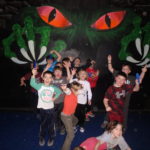 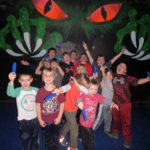 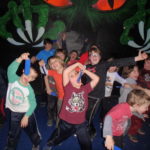 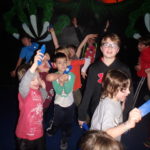 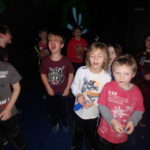 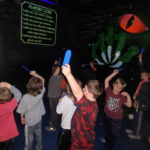 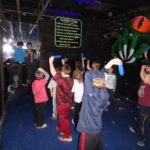 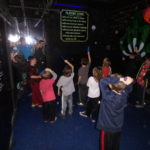 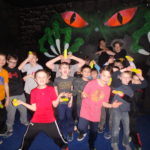 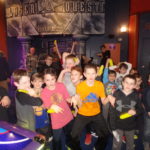 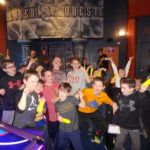 The Park Ridge Winnebago Nation returned to YMCA Camp Minicani for the first time in  3-years.     Scouts explored the trails and challenge courses as they competed in the plate hunt and searched for unusual objects.  Many took advantage of the activities that included archery, horseback riding, boating, fishing, basketball, and Gaga ball.  Everyone was happy to be back.

At sunset, the Great Chief Matt Hachigian led the Winnebago Nation to the Council Fire where new Scouts were welcomed to the Nation and long-time Scouts were honored for their achievements.  After the ceremony, the camp chefs fired up the barbecue pits to cook “second dinner”.  Scouts and dads enjoyed their traditional tribal meal as they swapped stories around the campfire.

Later Saturday evening, Joe Ott (pictured above) and his son Sam Ott of the Sauk tribe set-up their vintage 1987 Sears telescope so the Wilderness Scouts and their dads could get a closer look at the moon and stars.  Over 100 dads and Scouts took a gazed at the Wisconsin night skies.  The Camp out was a truly memorable experience.

The 2016/2017 school has gotten under way, which means that it is time for Scouting season. Mike Grapenthien the Nation Chief of the PR Iroquois Nation welcomed new members to the Park Ridge Wilderness Scouts and Princesses at the Friday night’s Induction Ceremony. There was a march, a campfire, words of wisdom, and plenty of smiles from the girls joining the Iroquois Nation. Moms, dads, and kids attended the annual ceremony held at the Wildwood Nature Center.

Many of you probably already have heard of the tragic early passing of Kate Babich earlier this week.  Kate besides being a fun-loving spunky 7 year old, loving daughter and sister, and fantastic friend to many was also a wonderful member of the Mighty Creek.  It was always a joy to see her and her father Cooper at Mighty Creek outings, campouts, tree sales etc.  She will be greatly missed.

Many throughout Park Ridge are honoring Kate and supporting the Babich family by placing purple ribbons and bows on trees.
Also as many of you are looking for ways to help the family in any way possible, please note that a foundation is being set up at the family’s request to honor Kate.  We welcome you to visit the link below to learn more about the Kate Babich Foundation.
https://www.youcaring.com/details-tbd-594328#.V3V5_4qTICw.email
We will miss you Kate

This past Memorial Day the Park Ridge community honored the veterans who died while serving in the U.S. military.   It was beautiful day for a parade.

The Park Ridge Indian Scouts and Indian Princesses pulled wagons while throwing candy and trinkets to parade goers.  And yes, there were the parade  floats of the PR Iroquois Nation.  Kermit the Frog, a giant rubber duck, running with the bulls, a dinosaur, patriotic themed vehicles, flamingos and a Tiki bar  were a few of the floats that traveled the parade route.   The Seminole had a massive float themed with the organization’s upcoming name change to the Park Ridge Wilderness Scouts and Princesses.  Matt Adam’s Chippewa tribe, part of the PR Winnebago Nation, decided to get in on the action with their salute to the new Star Wars movie.  Maybe it is time for the rest of Federation to get into the float competition, too.

It was a great parade.  Most importantly, the kids had fun with there families as we paid tribute to our fallen veterans.

We at the Park Ridge Indian Scouts and Indian Princesses would like to thank the current and former members of U.S. military for all  they do to protect our freedom.  Thank you.